Outboard And Inboard: Which Motor Is Right for You?

Many family boats, including deck boats and cabin cruisers, offer a choice of outboard or inboard power. When both options are available, is there a better choice between the two? CALON GLORIA walks you through inboard versus outboard motors and provides insight into the pros and cons of each.

Family boats with inboard power are almost always equipped with a stern inboard engine, which combines an automotive-type engine, mounted for use inside the boat, with a maneuverable drive unit. Whereas with a dedicated watersports tug, it has a built-in engine that turns a propeller under the boat, with the rudder providing steering control.

Outboard motors range in power from 2 to 600 horsepower, but for family boating the range is usually 90 to 300 horsepower. As outboard engines have become more powerful, they have become increasingly popular on large cabin cruisers and day boats that were once always equipped with inboard engines. These may be equipped with three or four outboards, and their combination produces more power than the largest pair of stern drive engines available, resulting in performance that was once unimaginable. 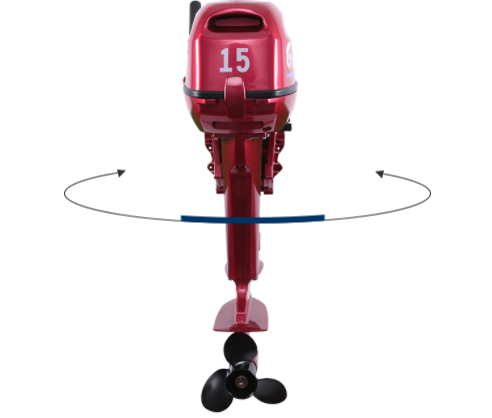 In this example, a 200-horsepower outboard typically matches the performance of a 250-horsepower inboard simply because the outboard is lighter and because the weight is more effectively placed at the back of the boat rather than inside. This rule of thumb applies as you move up and down the horsepower scale. However, even with less horsepower, outboard-powered boats typically cost a little more - 2 to 4 percent - than similar boats with stern drives.

Because it is typically lighter in weight and designed to be more efficient, an outboard engine typically offers better fuel economy than a stern drive. Both require similar annual maintenance, except in cold climates, where the cooling system of most outboard engines requires flushing with antifreeze, usually performed by a marine service center.

Outboards are self-draining and many owners can complete their own off-season service. Most inboard motors cannot be fully tilted out of the water, which is an advantage for outboards if the boat is docked or moored in salt water all day, as it prevents marine growth and corrosion from occurring on the drive.

Because the entire engine is outside the boat, an outboard is easier to service than an inboard. With the boat on a trailer, you can simply stand next to the outboard.

Repairing the inboard requires working under the engine hatch, usually in a very narrow area. When an outboard is damaged or simply worn out, repowering the boat with a new outboard is relatively easy. Repowering an inboard boat is also an option, but it is a more challenging project.

An outboard motor has a number of advantages.

It is lighter, faster, more efficient, and easier to maintain; because the entire engine is located outside the boat, there is more room on board for seating or gear; and the new outboards are cleaner, quieter, more powerful, and more versatile than the engines offered a few years ago, all of which is why they are becoming more popular on more types of boats.

Stern motors do have some advantages as well.

The drive unit is lower on the transom, which allows for a full-width boarding or swim platform that won't be cluttered by the outboard motor. This does improve the leisure experience, and many people find this neat look more attractive.

When equipped with a drive with a forward-facing propeller, the boat can be used for wake surfing, an unsafe activity that is not even legal in most waters - because the spinning propeller is close to the surfer and can easily cause an accident.

We are a professional outboard motor manufacturer that integrates R&D, production, sales and after sales. Please contact us now and leave your message, which horsepower and color and stroke you'd like to know.

Next: Reasons to Choose An Outboard Motor