During KTNRB cleanup events, volunteers work together to pull trash from some of the more difficult areas to reach in the river. The boat and outboard are designed to travel into shallow areas, many of which collect trash after floods. KTRNB has collected 2,816 pounds of trash since receiving the boat in July. Since its founding, the organization has rallied nearly 1,500 volunteers to pull more than 113,000 pounds of trash from the river, with 48,000 pounds removed in 2019 alone.

"I love doing river cleanups with Keep the Tennessee River Beautiful,” said volunteer Amanda Watson of Lenoir City, Tenn. “One of my favorite parts of a clean up is riding on the boat and looking at the trash that we just pulled out of the water. It's such a gratifying feeling to know I've made an impact on cleaning up a river that I love.” 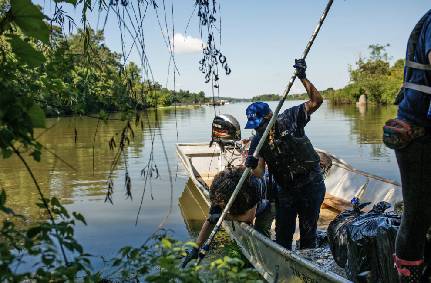 “The Tennessee River is in Yamaha’s backyard, both in Tennessee and Georgia,” said John O’Keefe, Senior Specialist, Government Relations, Yamaha Marine U.S. Business Unit. “The health of this waterway is essential to many communities throughout the Tennessee Valley. Supporting Keep the Tennessee River Beautiful’s mission is a meaningful way for Yamaha Rightwaters to play a role in the preservation of this waterway. We look forward to seeing what the team will accomplish with the boat and outboard.”

Yamaha Marine products are marketed throughout the United States and around the world. Yamaha Marine U.S. Business Unit, based in Kennesaw, Ga., supports its 2,400 U.S. dealers and boat builders with marketing, training and parts for Yamaha’s full line of products and strives to be the industry leader in reliability, technology and customer service. Yamaha Marine is the only outboard brand to have earned NMMA®’s C.S.I. Customer Satisfaction Index award every year since its inception.