“We knew we needed more horsepower for a larger boat and reached out to Yamaha first since we've been running them for years. If we get another boat as we grow, we’ll do it exactly the same again,” said Brian Vest, President and Founder, Conch Republic Marine Army. “Support from Yamaha Rightwaters gives our organization more momentum to move forward with our mission clean up our waters and restore marine habitats. There’s still much work to be done. We’re proud to use the motor to make a difference in the Keys.”

Vest initially formed the Conch Republic Marine Army as a volunteer organization dedicated to removing marine debris caused by Hurricane Irma, which struck the Keys on Sept. 10, 2017. The massive storm devastated the land, as well as the ocean and bay. Much of what was once on solid ground was thrown into the mangroves, waters, and back country, where it continues to wreak incredible havoc on the environment and ecosystem. Using kayaks, canoes, and manual labor, the Conch Republic Marine Army removed 306,760 documented pounds of debris, including 722,010 feet of trap line removed from the mangroves and 82 refrigerators. The organization estimates roughly two million pounds of debris remain for removal. 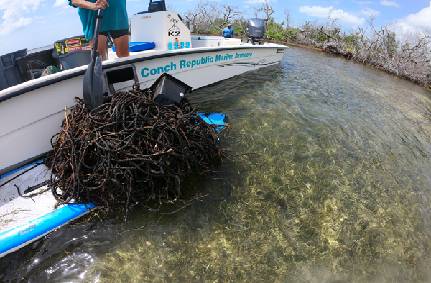 “The Conch Republic Marine Army is willing to do whatever it takes to remove debris from the Keys,” said John O’Keefe, Senior Specialist, Government Relations, Yamaha Marine. “Brian Vest and his volunteers are committed to preserving these waters for future generations, a cause that is central to the mission of Yamaha Rightwaters. We’re pleased to have the opportunity to make this happen for the Conch Republic Marine Army and we applaud their efforts.”

Yamaha Marine products are marketed throughout the United States and around the world. Yamaha Marine U.S. Business Unit, based in Kennesaw, Ga., supports its 2,400 U.S. dealers and boat builders with marketing, training and parts for Yamaha’s full line of products and strives to be the industry leader in reliability, technology and customer service. Yamaha Marine is the only outboard brand to have earned NMMA®’s C.S.I. Customer Satisfaction Index award every year since its inception.